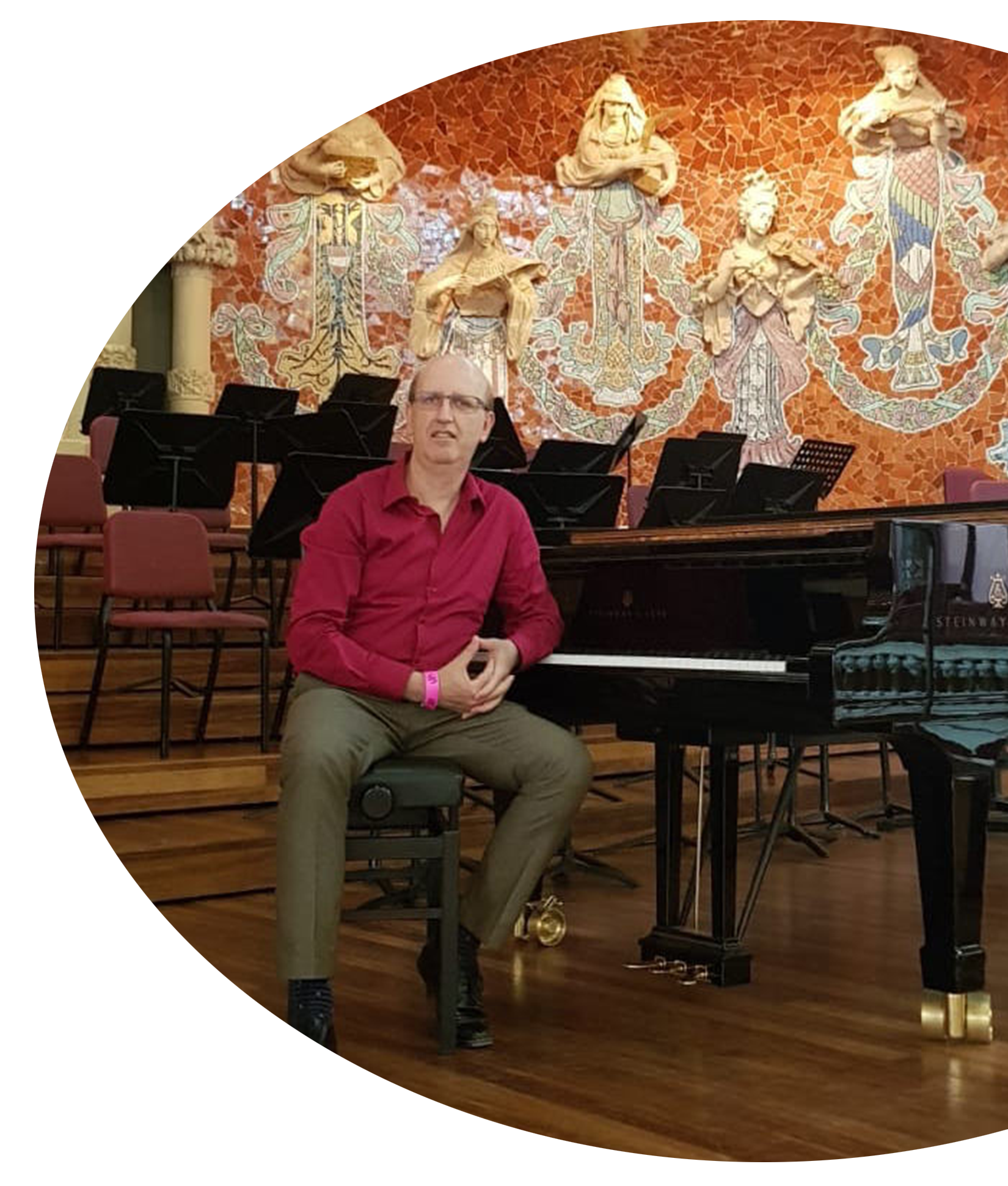 Born in Bologna, Italy, Andrea Angelini began his piano studies as a child, at the Rimini Lettimi School. He later earned a second level degree in Piano at Ferrara’s Frescobaldi Conservatory. After earning a Master in Choral Conducting he studied music therapy with Professor Cremaschi of Milan University. His interests led him to the choral field, and he earned a Bachelor studying at the International Art Academy in Rome with Fulvio Angius. He also studied organ at Pesaro’s Conservatory of Music. Finally, he got his second level degree in Choral Conducting at the Cesena Conservatoire of Music.

He is the Artistic Director and Conductor of the professional group Musica Ficta Vocal Ensemble that frequently performs in important Festivals in Italy and abroad. For many years, Andrea Angelini has conducted concerts with the choir Carla Amori, in Italy and abroad. Named Director of the Rimini Community Choir, Alessandro Grandi, he led this choir in several performances, including in important venues such as St. Peter’s Basilica in Rome – where he was able to personally meet Pope John Paul II – and in Milan’s Cathedral. He has also conducted the Belarusian National Capella Choir, the Lithuanian Jauna Muzika Choir, the Latvian Ave Sol, the Ukrainian Ave Musica, the Russian Domestik and the Tudor Consort from New Zealand. Andrea Angelini is the Artistic Director of the Choral Festival Voci nei Chiostri held annually in Emilia Romagna Region. He has been member of the Jury at many International Choir’s Competitions in Italy, Europe and Asia. He frequently leads choral workshops in Italy and abroad (Romania, Russia, Belarus, Moldavia, Hungary, Malaysia, Indonesia, Croatia and China).

He has written numerous transcriptions and arrangements for choirs and chamber ensembles. His transcription of Faure’s Requiem is published by Gelber Hund Verlag of Berlin. For the American CanticaNOVA Publication, he has prepared transcriptions of important Renaissance Motets. He has published his composition with Eurarte and Ferrimontana. He has been a member for Italy of the World Choir Council. Actually he is the President of AERCO, the Emilia-Romagna Regional Association of Choirs.

Since 2009 he has been conductor of the MusiCæsena Academy Choir and of the MusiCæsena Vocal Group. She is the artistic director of the “Sounds and Colors” concert season which this year has reached its seventh edition. An important season for the city with major events such as the Requiem and the Krönungsmesse by W. A. Mozart. In addition to the intense concert activity, she carries out an important work of musical study by proposing increasingly sophisticated and unusual repertoires.

Alongside the activity of director, she is an expert in musical preparatory and musical theater for the Primary Schools of the Province of Forlì-Cesena. She teaches at the C. and G. Andreoli Music School Foundation in Mirandola. Since 2016 she has been a member of the Artistic Commission of AERCO and from 2017 to 2018 conductor of the Regional Youth Choir. 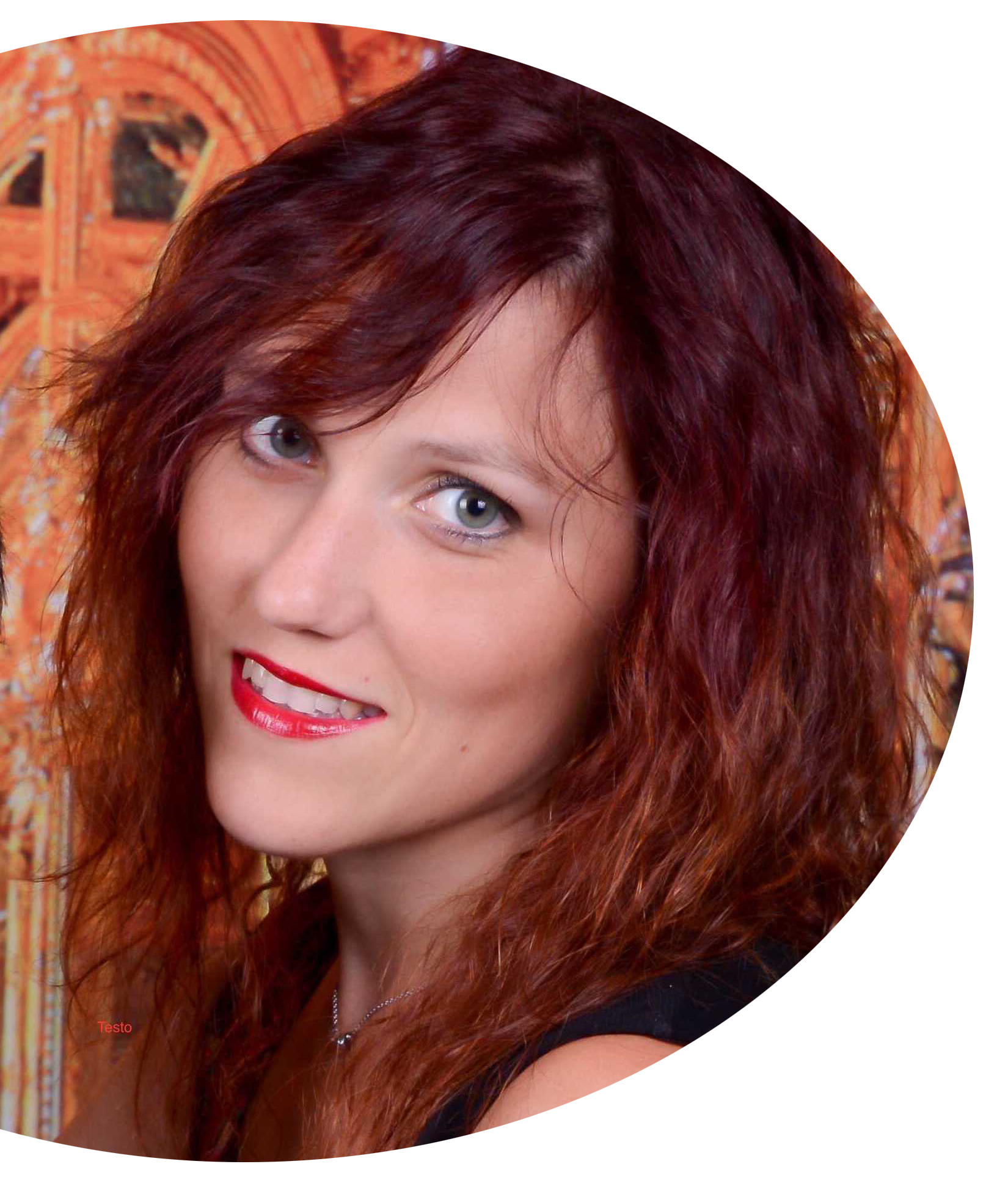 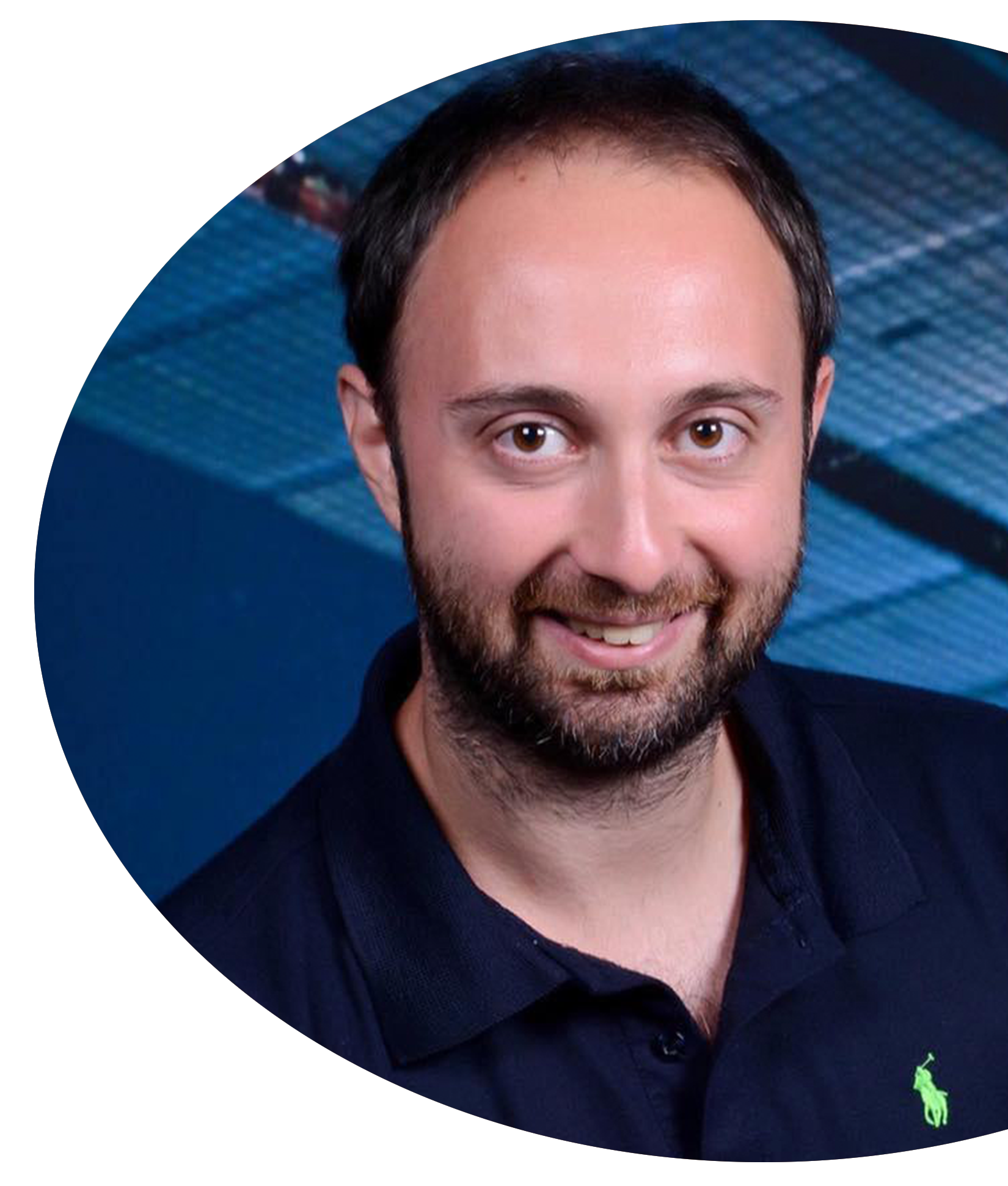 The Artistic Direction of the Gregorian Chant School is entrusted to Luca Buzzavi, with the collaboration of Michael Guastalla

Luca Buzzavi obtained with full marks the second level degree in Prepolyphony at the G. Verdi Conservatory of Turin under the guidance of Prof. Fulvio Rampi, the first level diploma in Choir Direction and Choral Composition (with honors and mention of honor) at the L. Campiani Conservatory of Mantua, the master in Physics (with honors) at the University of Bologna, the 1st level University Masters in Teaching and Psychopedagogy for DSA and SEN and in Strategies and good practices in the classes multicultural (both with honors). He studied Classical Guitar and attended numerous masterclasses on choral conducting (in particular at the Guido d’Arezzo Foundation with Donati, Marzola, Marzilli, Pavese, Berrini, Graden, Corti, Busto, Rasmussen, Lah, Broadbent, and in other intensive courses with Phillips, Krawczynski, Leech), Orchestra Conducting (Nicotra, De Palma) and on Musical Didactics and Pedagogy (Leo, Astulez, Visioli, Piccardi, Oetterli, Paduano).

He teaches classical guitar, ear training and choral singing at the Andreoli Foundation of the municipalities of the Northern Area of Modena, where he prepares the choral singing class consisting of the Aurora Children and Youth Choir. For the same Foundation he is an external expert in the Primary School for projects related to Musical Preparation and the School Choir and a member of the Disability Project team.

He is artistic director of Accademia Corale Teleion (Poggio Rusco – MN) where he follows the Gamma Chorus chamber choir and the Gregorian Schola Matilde di Canossa, organizes and holds seminars and summer courses with illustrious teachers on Gregorian Chant and Polyphony; in particular he is artistic director and teacher at the School and the Summer Course of Gregorian Chant in collaboration between the Teleion Choral Academy and the professional ensemble Cantori Gregoriani. He taught the 1st Online Course of Gregorian Chant and the 2nd Online Course: Topicality and Rhetoric in Gregorian Chant, promoted by AERCO. He is a member of the editorial committee of the magazines FarCoro and Dirigo, lecturer at the regional course for school choir directors promoted by AERCO and a member of the Artistic Commission of USCI Lombardia. He has obtained important results and awards in national choral competitions as director, composer and commissioner.

As a composer he participates in the main contemporary music festivals as well as in his city, in Bolzano and Parma. With one of his pieces for orchestra selected by the Conservatory of Mantua, he participated in May 2015 in the first “Claudio Abbado” Competition held at the Milan Conservatory.
Since 2012 he has been director of the Choir Discàntica and has also founded and directs the Schola Gregoriana in Mantua with which he provides liturgical-musical service in the Pontifical celebrations in the Cathedral of Mantua in collaboration with the diocesan liturgical office.
Since 2018 he has been president of the Accademia Musicale Harmonica music school. 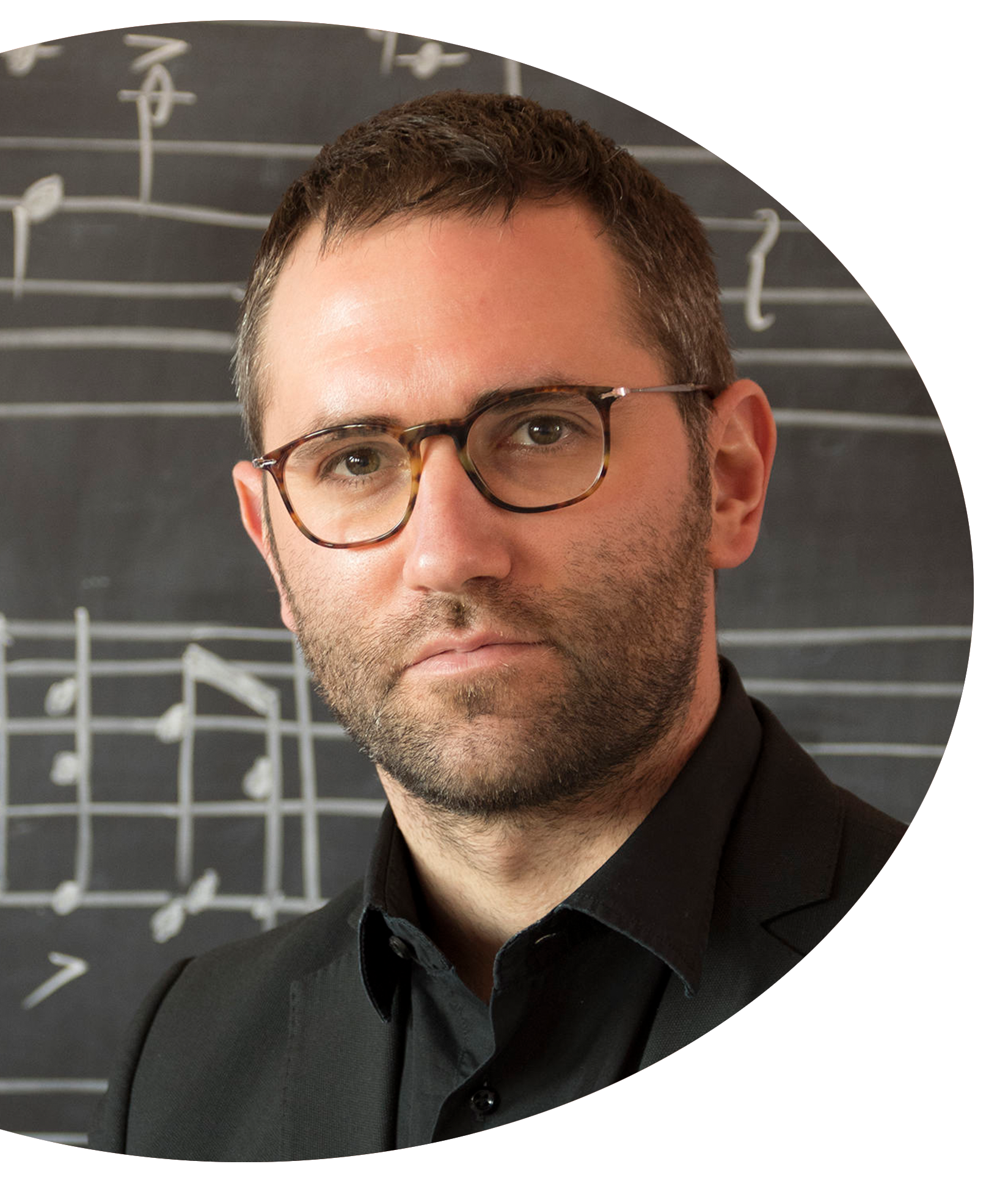